London Beer City kicks off a week today on Thursday, the 3rd of August, and runs through until Sunday, the 13th, with beer events going on all throughout the city. 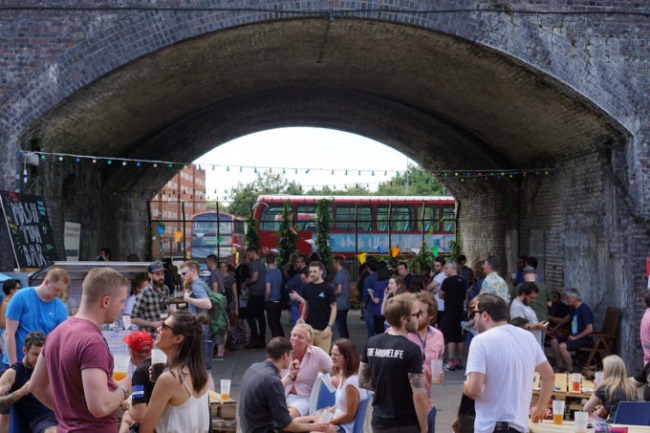 Within that time, there will be a phenomenal array of events celebrating beer in this town, with everything from tap takeovers, beer and food pairings, brewery open days, talks and an epic Battle of the Bottle Shops. Not only that, the week is bookended by two world-class beer festivals: London Craft Beer Festival and Great British Beer Festival.

As keen purveyors of beer and fun times, we at The Five Points are getting pretty stuck in to the beer week, alongside our Hackney Wick brethren Mason & Company. Here’s a run-down of what we both are up to during London Beer City: 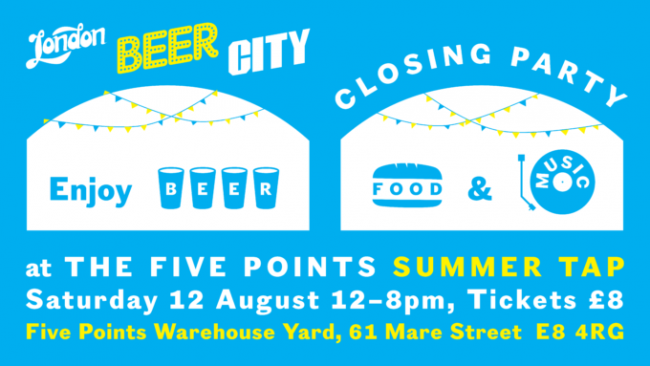 Kicking off the whole citywide frenzy of beer will be the London Beer City Opening Party at Mason & Company on Thursday, the 3rd of August. This will be the first chance to try the two limited edition collaborative brews for the week (more on that in a bit), which will be on pour alongside some of the best beers in the country!

There’s going to be great festive feels from DJs including the legendary Bradley Hall, plus a parade of Parm and other delights from the Capish? Street Food kitchen.

The London Beer City Opening Party is free entry and all are welcome. The North and South London Beer City collab beers will be on pour from 7pm, but head there early for food and a huge, huge selection of exceptional drinks to get stuck into. 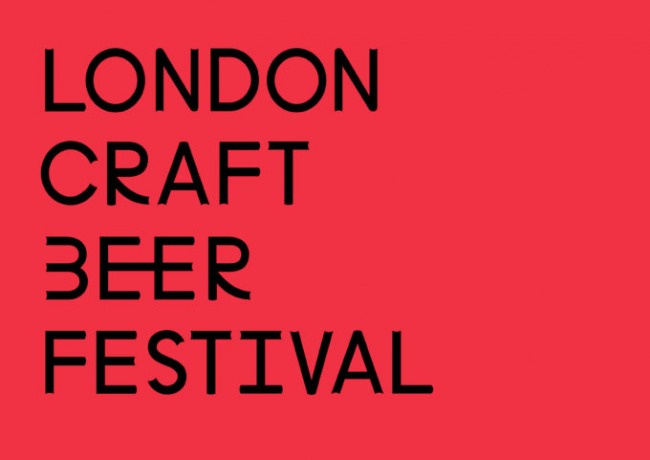 We’ll be holding it down at London Craft Beer Festival alongside a great crew of other brewers at the so-called East London Brewers Bar, but really it is and forever will be known as the LCBF Party Bar. Seriously, we’ve made a hashtag so it’s 100% legit. We are bringing top beer and top vibes alongside Affinity Brew Co., Crate Brewery, Hackney Brewery, 40FT, Anspach & Hobday, Signature Brew and Redemption Brewing. So come along for some of the best beer and bantz at the festival!

In a nod to our Northern family in Leeds, Whitelock’s Ale House and The Turk’s Head, Mason & Company are the Yorkshire Beer Hub for London Beer City throughout the week. Expect a wonderful selection from breweries such as Magic Rock Brewing, Northern Monk Brew Co, Kirkstall Brewery, Roosters Brewery, Ilkley Brewery, North Brewing Co. and more. 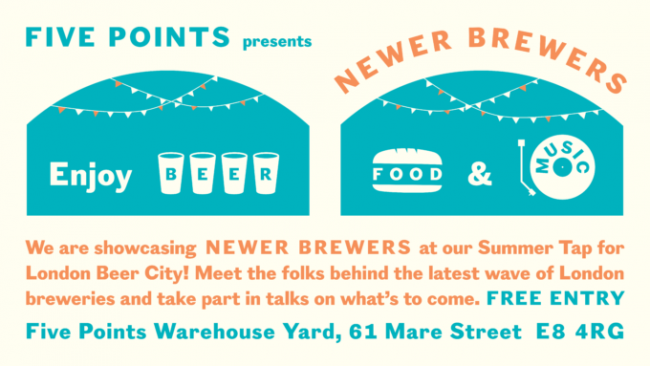 As part of our Summer Tap Saturdays, we are dedicating our guest lines at our Summer Tap to some newer London (and near enough!) breweries on Saturday, the 5th for Five Points Presents Newer Brewers. Come and enjoy beer from Affinity Brew Co., Villages, Elusive Brewing, Solvay Society and others, plus get a first taste of our international collaborative beer with Eternal City Brewing: Brit Pop!

We are also hosting a panel discussion on How to Get a Gig in Beer at 2pm, with confirmed industry titans including Archie Village from Villages and Stephanie Palgrave-Elliot from Caps & Taps. It’s free to attend, so rock up and learn how these folks got stuck into beer. 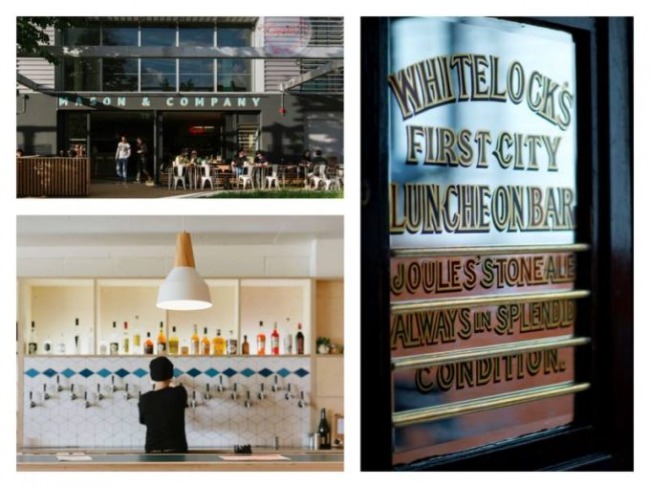 Don’t mess with Yorkshire! Whitelock’s Ale House, the oldest pub in Leeds, will take over Mason & Company on Monday, the 7th of August, for a proper Northern knees-up! There’ll be a particularly special line-up of Yorkshire breweries on the bar poured by legends among the Whitelock’s staff.

The beer on draught will feature plenty of limited-edition beers, with many folks from the breweries themselves up for a chat and relaxed Meet the Brewer action.

The Five Points will be at the London Beer City bar at the Great British Beer Festival alongside Redemption Brewing and Windsor & Eton Brewery. Among the beer we’ll have on cask throughout the festival is an ultra-rare cask of Field Day Citrus Pale, alongside stalwarts of our cask range Five Points Pale and Railway Porter.

We are throwing the closing shin-dig for London Beer City at our Summer Tap’s Yard on Saturday, the 12th of August. Enjoy beer across four bars from 16 of London’s best breweries including Beavertown Brewery, The Kernel Brewery, One Mile End, Pressure Drop Brewing, The Redchurch Brewery, Fourpure Brewing and ourselves. Capish? Street Food will be serving up saucy sandwiches from their container kitchen, and there will be plenty of tunes played on the ones and twos from our resident DJs.

Plus, there will be optional tutored tastings focusing on local brewing hubs Bermondsey, Tottenham and Hackney.

Tickets are £8 for entry and include your first pint 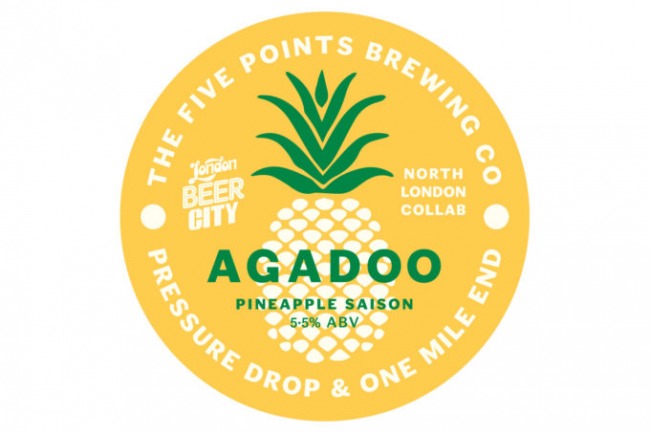 We brewed the north of the river London Beer City collab beer at our brewery underneath Hackney Downs Station with our pals at Pressure Drop and One Mile End, along with brewing superstar Jenn Merrick.

The North London Collab beer is Agadoo, a rich farmhouse saison brewed with El Dorado hops and a half-tonne of Costa Rican pineapples. This is a beer that is juicy, yet dry, brewed with Bohemia pilsner and wheat malt for a light, refreshing summer beer.

We look forward to the Agadoo debut at the London Beer City Opening Party, alongside the collaborative beer filled with Southern Hemisphere hops from our South London counterparts Fourpure Brewing Co., Wimbledon Brewery and Brew By Numbers. You’ll find both beers at many amazing venues throughout London Beer City, as well as the Closing Party at our Warehouse Yard.